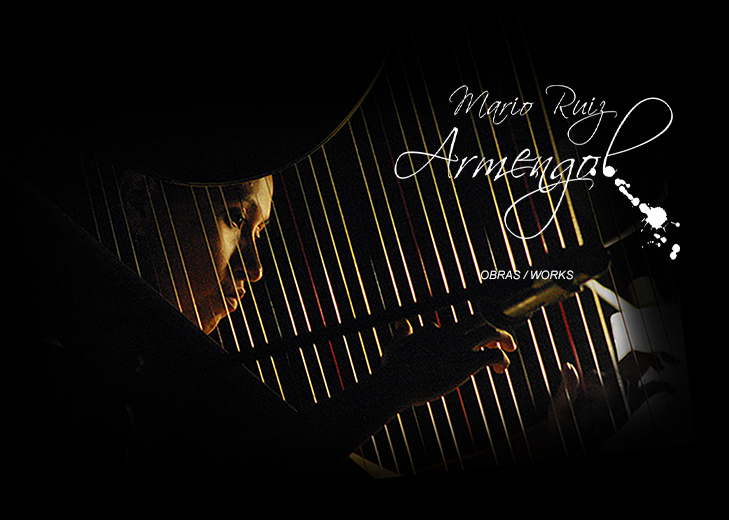 As has already been mentioned, Mario Ruiz Armengol was the composer who, during the twentieth century, wrote the majority of music for the pedal harp in Mexico and Latin America. He was the only one of his generation to exploit the possibilities of this instrument and thereby amply enrich the repertoire of Mexican harp music.

His works for harp, written between 1952 and 1978, stemmed from his encounter with harpist Carmen Rosselló, whom he met in the orchestras of XEW, and who taught him how to write for harp. Inspired by Rodolfo Halffter and Carmen, in 1952 he wrote his first work for this instrument, Prelude for Piano or Harp, a work inspired by and thought through with the harp in mind, and which would also be his first piece written in the genre of classical music, giving to the music written for harp special importance in his catalog of works.

In the 24 pieces and the two of which he arranged for harp duet can be observed, step by step, how he discovered and explored this instrument, developing at the same time an ever greater complexity in both written and technical resources until he dominated them completely. Pieces in the impressionistic style, full of lyricism and great command of harmony, of different levels of difficulty, demonstrate the profound love and knowledge Ruiz Armengol had for the pedal harp. In his work, we see a marked French influence from such composers as Claude Debussy, Maurice Ravel and Marcel Grandjany.

Ruiz Armengol had a strong connection with the harp on a personal level. His sister Judith Ruiz, besides being a singer, was also trained as a harpist. From his encounter with Carmen Rosselló in the ’50s sprang an amorous relationship that lasted several years. Nevertheless, Carmen decided to accept work in Venezuela and put an end to the relationship, and with this breakup also ends his first period of music for harp, a task which he would later resume. Sixteen years later he re encounters Carmen, they decide to marry, and then begins a second period of writing for harp. The marriage last ten years, and after the divorce, he never wrote for the harp again despite the insistence of harpists at that time.

It should be mentioned that Carmen came from a family of renown Mexican harpists; Eustolia Guzmán (aunt) and Esperanza Guzmán (mother), brought the composer even closer to the world of the harp. During his musical career, due to the intense activity as orchestra conductor and personal contacts, he worked with a great number of Mexican harpists such as Guillermina Lozano, Martha Beltrán, Judith Flores Alatorre, María Cristina Flores Alatorre, Teresa Oropeza, Javier  Zavala, and Lidia Tamayo, to which he dedicated some of his works.

*The year in which the pieces were written is indicated. In some cases the year of composition is unknown.