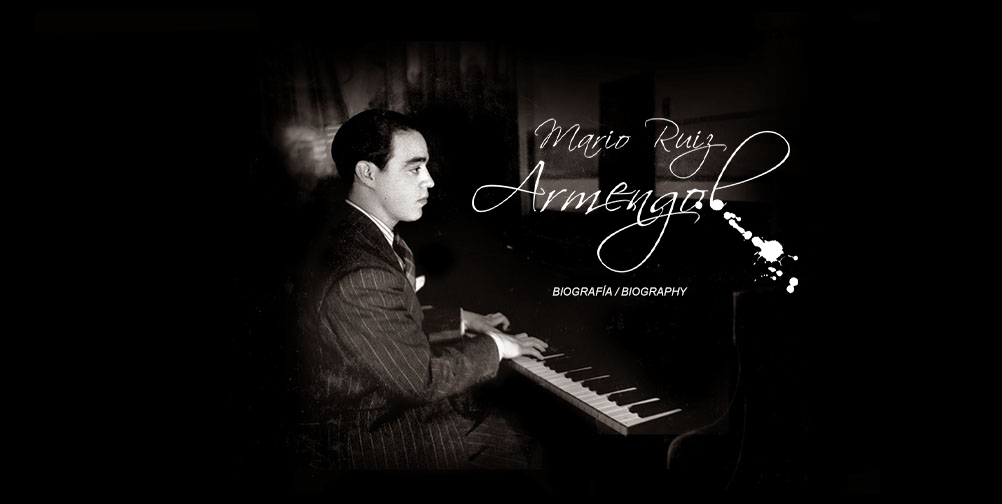 My dream, from the first time I heard Scherezade
by Rimsky Koraskov, I must have been 16 or 17 years old, was, I want to be like that, I want to write like that.

Composer, pianist and orchestral director, he was born in the city of Veracruz on the 17 of March 1914 and died in Cancún the 22 of December 2002. Member of a family of musicians, he began to play the piano at the age of eight, and at fifteen he debuted as an orchestral conductor in the company of Leopoldo Beristaín. He was a member of the founding group for radio station XEW, where he acquired fame as composer, arranger, and orchestral conductor. His popular music was performed by famous artists such as Andy Russell, Chucho Martínez Gil, Jorge Negrete, Pedro Vargas, Fernando Fernández, Lola Beltrán, Emilio Tuero, Eugenia León y Arturo Sandoval among others. Regarded as a pioneer of radio broadcasting in Mexico, pillar of the modern bolero and of the feeling bolero, he had a successful career in which he became one of the principal figures of Mexican popular music during the twentieth century.

In 1936 he studied harmony and counterpoint with José Rolón. During the decade of the ’40s he met Manuel M. Ponce and in this same year he began his work with Mexican cinema, where he composed music for important movies during the so-called golden age of Mexican films. In 1948 he studied and began a friendship with Rodolfo Halfter who motivated him to write Siete Ejercicios de Composicion y Armonía (Seven Exercises of Composition and Harmony), cornerstone of what would become his body of classical works and in 1952 he composed his first work of the genre, the Prelude for Piano or Harp.

Mario Ruiz Armengol was a major figure in the jazzistic movement of his time. Claude Gordon, Al Hirt and Cy Coleman performed his works with great success. In 1954 he was named “Mister Harmony” by musicians such as Duke Ellington, Billy Mays and Claire Fisher in the magazine Billboard. As orchestral director he conducted important musical comedies and in the ’60s he became musical director of RCA Victor Mexico. Although he never gave up writing popular music, toward 1960 it took second place to his career as a composer of classical music, an activity to which he dedicated the rest of his life.

His catalog in the genre of concert music contains a vast repertoire of works for: piano solo, waltzes, scherzos, minuets, sonatas, fantasies, preludes, music for piano with four hands, 31 children’s pieces, 19 Cuban dances, 16 studies, 16 reflections, 32 miniatures, chamber music for piano and violin, music for flute, cello, and 24 pieces for harp as well as 2 harp duets. Also mention should be made of the orchestral arrangements made by Arturo Márquez of some of his piano pieces.

Several styles and authors helped forge the musical voice of this great composer. Originally from Veracruz, his work is marked by Latin rhythms coming from Cuban music and the danzoneras; on the other hand, jazz and the clear influence of musicians such as Ar Tatum and Duke Ellington is present in the fine harmonic treatment of his music. Finally to all this we incorporate his love of composers like Manuel M. Ponce, Nikolai Rimsky Korsakov, Claude Debussy, Maurice Ravel, Sergei Rachmaninov and Igor Stranvinsky. In this way he created his personal style, a unique imaginative and original language, far from the nationalistic currents of his era, a style which, during areer, was transformed into a work of great quality, beauty, and sensitivity.