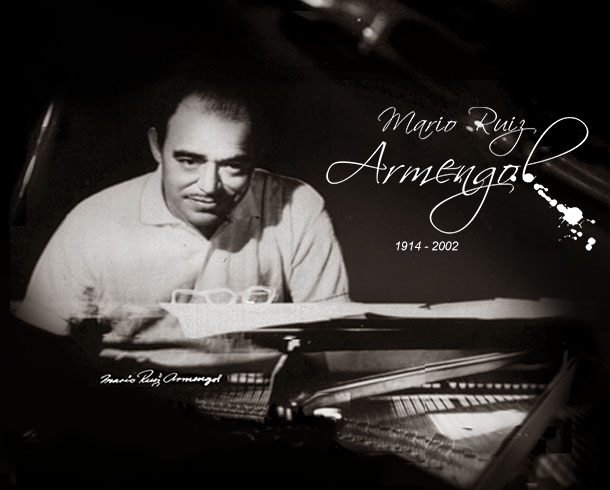 Mexico, country with a grand musical tradition, had its first encounter with the pedal harp during the nineteenth century. There exist pieces written for harp during that century and into the first half of the twentieth, nevertheless, there have been found few works or at least there are few of which we have knowledge. It wasn’t until Mario Ruiz Armengol decided to explore the possibilities of the instrument that we find a much greater number of works for the pedal harp.

Ruiz Armengol was a musician who, with great success and renown, took on every musical genre available to him: popular music, jazz, movie music, music for the theater, and finally, classical music, and thus became one of the most important musical figures of his era. Composer, arranger, orchestral conductor, a pillar in the world of Mexican radio broadcast, he found in the harp the impulse he needed to begin to write classical music.

His work for harp consists of twenty four pieces and two duets. He currently is, in Mexico and Latin America, the composer with the greatest number of works written for the pedal harp, therefore his work represents an invaluable resource within the Mexican classical music repertoire.

This website aims to preserve and disseminate this s to promote varied artistic endeavors and to aid in their creation.

In spite of the fact that the works for harp of Mario Ruiz Armengol is so extensive, by the beginning of the 21st century they had almost entirely been forgotten. Very few of the twenty four pieces were known, with the majority as yet unperformed. Only the manuscripts existed and there were no professional recordings.

For this reason, in 2005, Tierra Roja Producciones, formed by documentary film director Olimpia Corona and harpist Guadalupe Corona in collaboration with other artists of different disciplines, launched an integrated effort of recovery and diffusion.

After more than a decade of work we covered the entire country giving conferences and recitals. We also produce the documentary-video concert “Del Brazo y por la Calle…Reflexiones sobre la obra para arpa de Mario Ruiz Armengol” by Mario Ruiz Armengol” and we created four works of digital art based on the manuscripts of four pieces from this repertoire, as well as the recompiling and editing of manuscripts for the publication of a book of the complete works for harp by this composer.

Today we are filled with pride to witness the growing interest by performers, investigators, and the public in these works, thus confirming the achievement of our original goal. The first professional recordings were made in 2008 which included some of his works for harp. Today we have the recording of the full works for harp, made in 2017 by Mexican harpist Emanuel Padilla, as well as the investigative work currently taking place in the academic world.

With the aim of continuing to disseminate this music under the auspices of the National Funding for Culture and the Arts, and with the unconditional support of Patricia Ruiz Suárez, daughter of maestro Ruiz Armengol and inheritor of his works, we create this website as a meeting place for all those interested his repertoire and as a source of all the information we have gathered so far.